The adventure starts, as all Nullarbor trips do, with packing. Spare batteries — camera, strobes, primary light, backup lights, video lights, headlight for camping. Food — cooked and frozen pasta and stews, roasted nuts; don't forget the washing-up bucket. Tanks and tents, underwater lights, drinking-water drums, a camping stove, hundreds of feet of a guideline. There are no opportunities to buy on arrival when you're on a road trip to the middle of nowhere. We will be completely self-sufficient for the duration of our stay, camping by the cave entrance, generating our own power and filling our own tanks. From my home in Melbourne, Australia, it’s more than 1,400 miles to Olwolgin Cave.
NULLARBOR BOUND

Most stories of diving the Nullarbor caves talk about the route. First, major multilane highways. Then, after Adelaide, gently rolling hills and billboards. As the farmed greenery fades away nearly 1,000 miles later, options disappear. From here, it's a single-lane highway snaking along the southern coastline of our continent.

We pass suicidal kangaroos and thundering road trains and stop for the night in a tiny country town. Two days later we are on the Nullarbor proper, where the Southern Ocean crashes against high limestone cliffs.

The Nullarbor Plain was named from the Latin “null” and “arbor” meaning “no trees.” It makes fat and feature-less into a feature. The limestone cliffs swerve inland from the sea, and we drive down onto the lower plains. From the highway turnoff, it's a slower and bumpier journey along a dirt track.

The entrance to Olwolgin Cave is just under a mile from our campsite. After initial trips walking tanks between camp and cave in backpacks, some bright spark pointed out that the sandy walking track had become quite fat. The next trip out saw an explosion of wheelbarrows. The key to correct wheelbarrowing of dive gear is to move most of the weight over the front wheel, reducing stress on the arms. Of course, if you move all of the gear to the front, the wheelbarrow is almost impossible to steer and will tip over uncontrollably. Like many things in life, it’s a balance.

A FUZZY FRONTIER
Because we are down below the cliff line and close to the water table, the entrance to Olwolgin is a small depression rather than a massive doline. A rocky overhang shields two pools of water from the midday sun. Both were first dived in early 2002; the more promising-looking pool was declared a no-go — too small, with no way on. The smaller, harder-to-climb-into pool did the opposite — it opened up to a maze of shallow tunnels. Over the course of a few years and a lot of trips, the known extent of the tunnels was festooned with orange guideline, and the map rapidly expanded.
Unlike the clear-blue water and huge tunnels of the deep caves above the cliff line, Olwolgin features dark-green water. In some underwater caves elsewhere on the planet, divers can see a halocline — a clearly visible layer where heavier salt water and the overlying fresh water mix. In Olwolgin, this layer is dispersed through the tunnel, with the different salinity concentrations blending smoothly into each other. When we unavoidably swim through the mix, the disturbance creates a blurry layer of water that bends and traps light. I watch my buddy, Tim Muscat, swim past, seeing the wake of his gentle fin kicks in whirling fuzzy water behind him. 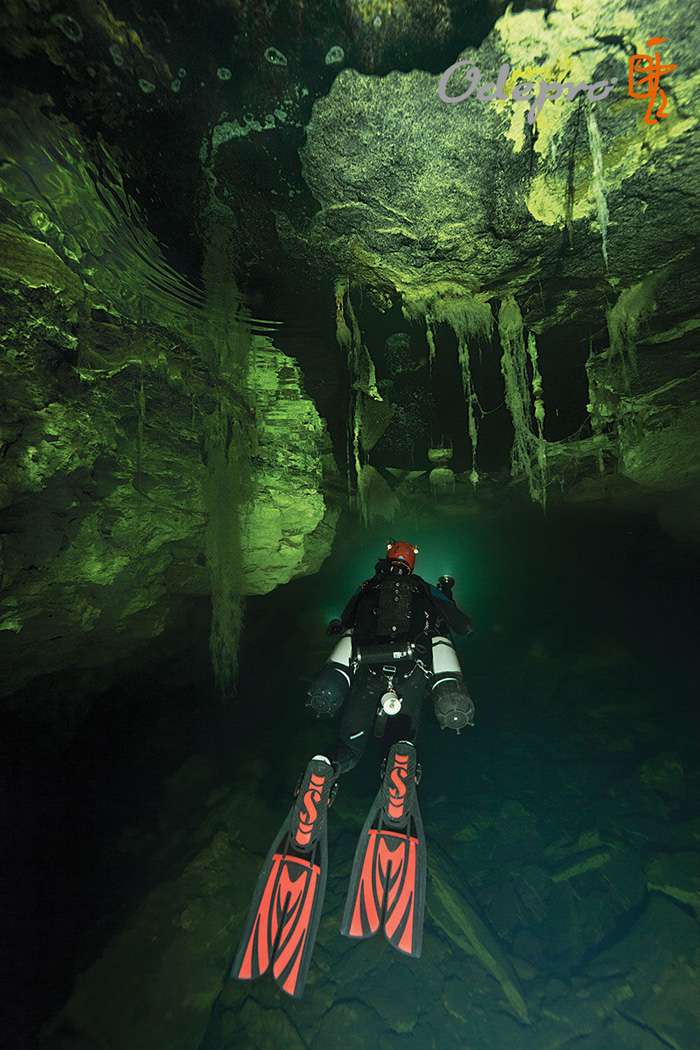 The mixing layers have created fantastic shapes, eroding the limestone at every level. But it makes photographs difficult — I cannot take a picture through water that someone has swum through. Instead, I find myself swimming hard up against one wall before turning into the middle of the tunnel and doubling back toward my following buddy. As long as both Tim and I keep moving forward into undisturbed water, the photos are clear and sharp. If I stop, the fuzzy mixing layer envelops the front of my camera housing. There are a few midwater collisions as we try to get the timing right. Tim is remarkably patient with my camera obsession. Distracting, unseen tunnels beckon left and right at every intersection of the guideline.
Tree roots from the surface have found their way down to the cave below, spreading out on subterranean surfacesuntil they drop into the depths under their own weight. The saltier layers farther down kill the roots, and the tree starts anew, growing another net of roots on the surface. The ghostly remains underneath form a fragile, tangled web hanging in the water. Signage reminds divers to swim along set pathways, ensuring that neither water movement nor a careless exhalation destroys these eerie creations. I try to get close enough for photos while staying far enough away to protect the roots from my presence. 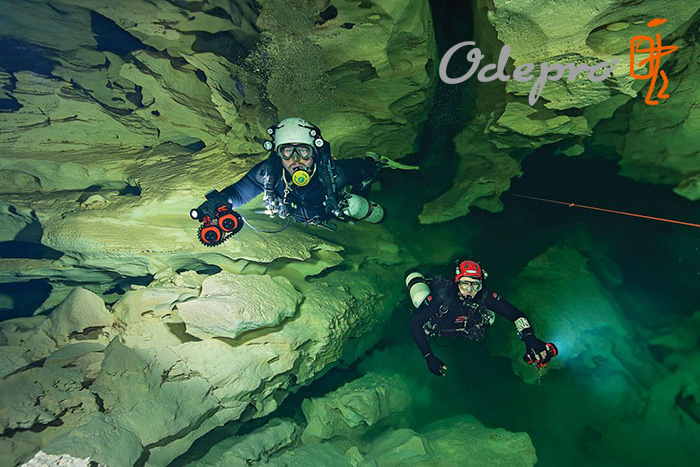 A TALE OF TWO POOLS
The rest of the team is not here for photographs.After several years of exploration and new tunnel discoveries via the first entrance pool, the cave seemed to have given up most of its secrets. Then, on a trip in late 2010, original explorer Paul Hosie decided to have one more look into that promising pool on the other side of the depression. With years of familiarity with the cave and its small crevices, he pushed down a twisty underwater chimney and through nearly 200 feet of a very small fattener.With an epic effort behind him — and a long, zero-viz exit — he was rewarded with a massive tunnel ahead. Suddenly, the push for newly discovered cave tunnels was on again, and the “downstream” Olwolgin rapidly showed itself to be larger, longer and more complex than the originally discovered “upstream” side.

While the others eagerly push into unknown territory and find inter-connecting side passages,I rejoice in being able to maneuver my large camera housing through the very small entrance. The rock scalloping in this newly revealed side of the system is stunning, and bigger tunnels give more room to swim around the fuzzy waters. Tim and I have limited time, and we select the most photogenic areas to visit, capturing images of places seen only by two or three divers so far.

Over the past five years, downstream Olwolgin has been the gift that keeps on giving. The exploration frontier is now more than a mile from the entrance, with more than 5 miles of mapped passages. There are huge rooms that make you wonder what’s holding up the roof, and tiny restrictions to convince you that you’ve reached the end of the cave — until squeezing through reveals large, continuing passages. In places, the roof has one set of bubbles down the middle, evidence that the exploration divers swam straight through to new territory, and no one has looked closely at either wall yet.

It's a stunning cave, and it’s a privilege to be the first to dive these unseen places. 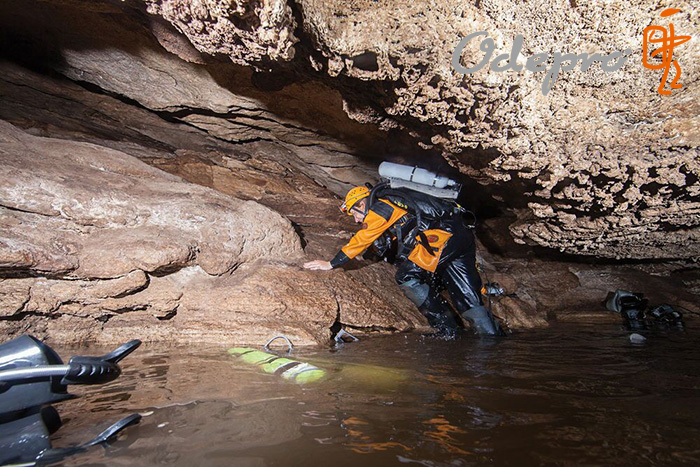 WHAT IT TAKES
Olwolgin is classified as an advanced dive site. Bookings of qualified divers are managed through the Western Australia Department of Lands. By limiting the number of divers, each diver has a better experience underwater, and the impact on the cave is reduced.
To become qualified for cave diving in Australia requires three courses after your Advanced Open Water cert: Deep Cavern, Cave and Advanced Cave. Each has experience requirements and prerequisites. Divers with other cave qualifications can complete crossover courses with the CDAA; international visitors can obtain a visitors permit and temporary membership of the CDAA with a local sponsor.
5 TIPS FOR SHOOTING OLWOLGIN
Olwolgin is a challenging place to take photos, with green, blurry water and things like navigation to concentrate on. Photographing here takes special techniques to capture the cave.
1 Add more light
Although the water is dark, the cave walls are white. By putting extra strobes on your buddy, you can extend the light beyond the camera and bring depth to the photos.
2 Keep swimming
The mixing halocline layer will make every photo look out of focus. Keep moving forward into undisturbed water to get a clear shot.
3 Pre-focus
Modern cameras are great at low-light focusing, but they still struggle in darker caves. Your buddy might not appreciate a primary light in her face for focusing each shot. Pre-focus the camera at the right distance, and snap happily.
4 Go wide
Tunnels here can be large, but there are beautiful sights in the smaller areas too. The little tunnels don’t provide an opportunity to back up to capture it all, so a very wide-angle lens is key.
5 Be gentle
Olwolgin has some beautiful and very delicate features such as tree roots and scalloped rocks. Before you get close to them to photograph, work out how to carefully approach each one, and think through how you’re going to swim away afterward without causing damage. 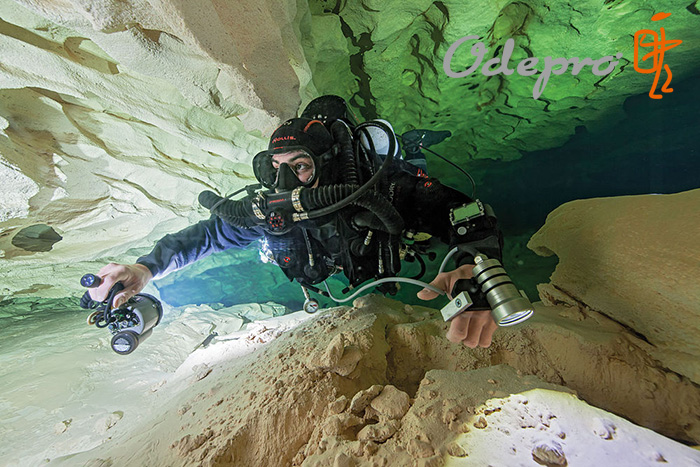 Olwolgin is a long way from anywhere, and there are no commercial operators running cave-diving trips to the region. PLANNING a trip to the Australian desert carries its own risks completely separate from the cave-diving experience. A car breakdown without appropriate EQUIPMENT can leave you stranded and in serious trouble. Things like additional spare tires, a satellite phone, and an extensive first-aid kit should all come into consideration. From a diving perspective, there are no spares on site. The most innocuous failure (like a drysuit seal or a smashed prescription mask) can leave a diver sitting at camp while the rest of the team enjoys themselves underwater.